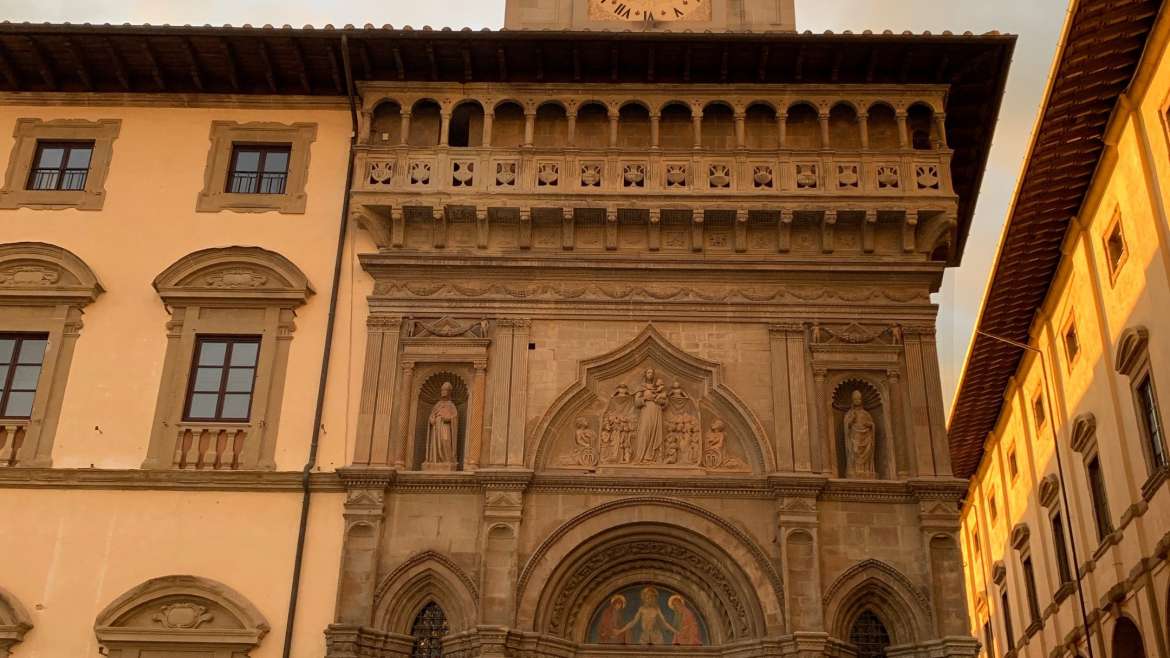 It was well after midnight. I was comfortably settled into sleep, when the merriment reached my ears. I rolled over, confident that the revelers would soon find their ways to dreamland.

Naturally, hour after hour clicked by and the partying now entered a new phase: loud singing.

Drunk with delirium, it didn’t dawn on me to simply get up, walk to the far side of the charmingly miniature sitting area and (ahem) close… the… window.

Pretending to be a local requires some imagination when you’re dragging a suitcase along the streets. We (myself and two other lady friends), trundled up the Corso Italia toward our destination. I had the location in my head – it was diritto/ straight ahead, and I tried to look cool like I owned the place.

That’s half the fun when you travel. You’re constantly around strangers. You can be anyone, really. It’s like being a teenager and pretending to be an adult, on your own, until you’re busted by your mom calling your name and you’re washed over with embarrassment that your cover is blown. Traveling solo, and knowing Italian well, I like to pretend I’m incognito, undercover, and the goal is how long can you keep it up? Sometimes I even make up an Italian nickname, one that only I know, but hey. Perche no?/Why not? So what if they speak to you in English, you can still pretend…

Finally, we arrived at the address. The door to our inn was… chiuso/closed – and locked.

A notice inside the palazzo-turned-apartment building lobby directed guests to a shop on the corner. Luckily, as it was the riposo time of day when a number of shops are closed, it was still open – at least for a little while longer. It had lots of delicatessen goodies, temptingly arrayed. The shopkeeper called the phone number. He explained that it was his son who was going to let us inside. We browsed while we waited. Then we bought various marinated goodies in turn, packed in to go containers, paid, and waited. After perhaps thirty minutes, he arrived. He explained he’d had to leave his class and drive in from his university to meet us. Back inside the lobby, he handed us our sets of four keys: the first for the door to the street; the second for the metal screen gate to the stairs; the third for the door from the stairwell to the hotel. The fourth to our rooms. With that sorted out, we scanned the lobby and found no elevator. Without hesitation and with apparent ease, Alessio scooped up our luggage and toted it the four flights to the hotel.

Except in the case of my room, which was five flights up. Not that I couldn’t use the exercise. Actually, the fifth flight was the most historic and the most intriguing. Separate from the main staircase, which was opulent, wide and graceful, this stair was hidden. It was barely noticeable even inside the main hotel corridor, inside the door off the main stairwell. It was – at most – eighteen inches wide and I’d blindly passed right by it. Hidden in plain sight! Going up, it twisted its way up.

As I stepped inside the door to my room, I rather expected to find a cubby of a room. Instead, the room was large and airy, with a high sloped ceiling with exposed wood rafters. A small sitting area with a much lower ceiling, included a writing area and small casement window that opened onto a niche of layered, sunny terraces.

It was a fascinating space! There were steps up to the bathroom door, which opened to a sleek interior. Steps up to a ledge by an upper window. Steps to an interior door that was locked…. The spaciousness around the king size bed could’ve held at least a dozen revelers for a dance party. If only I’d known. By the sound coming in from the large group of party people all night long, they were inside my room!

One thing about being in Italy, I like the revelry. Tired as I was, it was kind of sweet, really… all that happiness. And I enjoy the sounds of happy people. If I hadn’t been jet-lagged tired, I might have been tempted to join them.

Gradually, the city came to life and I discovered that the main party people were all the vendors who’d arrived the day before to set up for the Antiques Fair. This is a huge event, strewn over many streets and blocks, with almost anything you can imagine for sale.

What happens when you go to Arezzo, find it is hosting an Antiques Fair on the weekend you’re there, and you’ve no particular interest or attachment at all to the fair? The fair finds you! I walked out of the bar, strolled across the intersection, and approached the nearest booth. It was just being set up. I saw a woman hang something on a hanger from the corner. Of the canopy’s supporting frame. It looked like a piece of fabric, and I walked right over to take a closer look. It was stunning!

Have you ever seen tatting? I remember these incredible, intricate yet durable patterns. I’ve always been drawn to modern and classic designs. This was one of those. The vendor held one end of the fabric piece and I the other. It was large. It wasn’t until I got home that I found it would fit my bed and it made the most elegant cover ever!

I haggled, yes. It is what you do. I got a slightly lower price, which I had in my head as a good price. It was a phenomenal find and I knew it.

In the morning, we went into the corner bar for our caffe and pastry breakfast. We watched as locals filed in, dogs in tow, chatting with the baristas and each other.

Later that day, I wandered into the Piazza Grande. I was looking to meet my amiche/ lady friends.

Before I actually spotted them, I noticed a group of maybe ten people seated around a long table in the colonnade, just outside the Logge Vasari – a restaurant our innkeeper recommended. What I noticed on two people’s plates caught my attention. It looked so amazing. I turned and saw my friends. They said they’d just eaten. Being sporting ladies, they volunteered to sit with me and have a dessert while I had my lunch.

I ordered a souffle di uovo e tartufo/ egg and truffle souffle. It was shaped practically like an elongated beehive – non ho mai visto/ I’d never seen before – more than eight inches tall. Hidden inside at the bottom was a perfect, sunrise orange colored, three minute egg. Throughout the risen “hive,” black flakes of truffles speckled the gorgeous pale yellow cloud. It was savory, delicate, and heavenly! Honestly, it was so light as I scooped a spoon and savored a cloud of light, cheesy, and earthy warm amore/love. O, Arezzo! You are a seductive adventure…