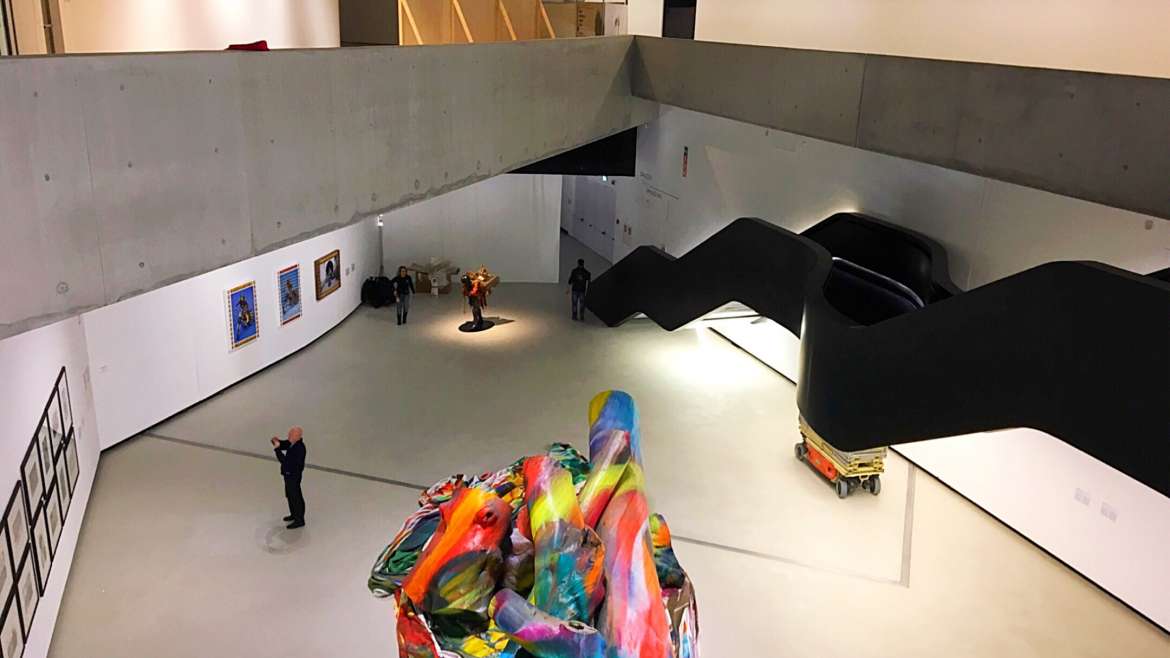 What particularly piqued my interest to visit the MAXXI besides the modern art, was the architecture  It isn’t often that Rome adds a significant, new building, especially one that makes headlines around the world. Architect Zaha Hadid rose to the status of “Starchitect” before passing away in 2016. She’s known for her signature curvilinear style that makes me think of marine life.

Most days a walk is a great option for exploring. This particular Wednesday, it was piovigginoso/ drizzling rain outside with no end in sight. Every trip should include one taxi ride: it makes for an appealing alternative kind of tour.

I love museums. As with most things that are yummy and rich, there’s a comfortable limit. For me, unless it’s an especially engaging exhibit, one and a half to two hours is fine. When you consider the ons-old, star-studded city of Rome, it isn’t at all a stretch to recognize that with the MAXXI, a star shines bright!

What struck me first was that the museum is combined with an existing, box-like single story background building. It is the intersection and projection above it that captures the eye. An open metal fence creates the signage and entry with large scale letters spelling M A X X I 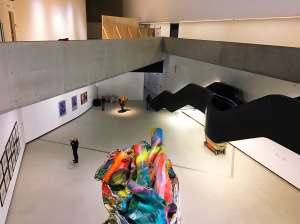 The most delightful part of the museum, for me, is the outdoor court. It is refreshing, daring, sleek and bold all at once. A fishing ship floats in front of the entry, with a car trapped vertically, suspended in a net. An extraordinary catch, it

A small café in the form of a VW van is friendly and seating by it creates a welcoming place to relax. One gets a sense of a dramatic performance here as the day becomes night and people come and go. It is a wonderful space. A great canopy with mast-like bobbing columns creates a covered entry to the interior lobby and galleries.

Inside, the curving spaces open up, with a multilevel open lobby. Stair rise and curve with rounded angularity, like the lines of a shark. Open metal grates allow light through. Curving lines counterbalance hard industrial materials.

The galleries are like appendages that have mated with transit terminals. The shell walls become the comforting containing edge allowing easeof navigation. The interior partitions are endlessly posable. Supported as hanging elements from a raceway track system in the ceiling, these become floating screens that create open rooms in the larger galleries.

I was able to visit only two of the five gallery spaces as a few were undergoing new installations. Even so, I appreciated the drama evident in the visible work going on.

I enjoyed the videos, the aquatic projections, the exquisite black and white photography that has a timelessness about it, and many other elements. I will visit again. It is a fascinating place that stretches our imagination and invites us to dream. What more can you ask for?

All the way home, riding the tram, through a tunnel to the metro, and out again for a final walk through Piazza di Spagna/ Spanish Steps, I just felt such renewed appreciation for the devotion of this great city to the arts. Grazie,Bellissima Roma!